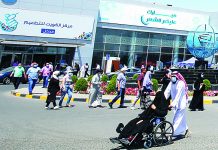 KUWAIT: Kuwait has vaccinated around 42,000 students and nearly 60 percent of teachers against COVID-19 ahead of the final exams, Al-Jarida Arabic daily reported yesterday. KUWAIT: People queue as they wait their turn to receive a dose of a vaccine against the coronavirus, in front of the makeshift Kuwait Vaccination Center, at the Kuwait International Fairground in Mishref, on Sunday. – Photo by Yasser Al-Zayyat

The number of people in Kuwait who had received their COVID-19 vaccines has reached around 822,000, or nearly 20 percent of the population, as of Saturday. Health authorities have sped up the vaccination campaign during Ramadan with hope of reaching one million vaccinated people soon.

The Ministry of Health had Sunday confirmed recording 1,127 new coronavirus infections and eight related deaths in the previous 24 hours. The new figures took the total cases up to 256,987 and deaths to 1,448 respectively, noted the ministry’s spokesman Dr Abdullah Al-Sanad. He pointed out that some 1,438 more people had been cured of the virus over the same period, raising the total of those who have overcome the disease to 240,465.

He added that the number of people hospitalized with the virus stood at 15,074, with 250 of them in intensive care units as of Sunday. Dr Sanad revealed that some 6,269 swab tests were conducted over the last day, increasing the total to 2,219,893. He renewed calls for the public to abide by health precautions to curb the spread of the virus.

The Ministry of Health had announced Saturday that Kuwait registered four new COVID-19 fatalities and 1,388 new infections in the previous 24 hours. Kuwait had announced eight deaths and 1,406 new on Friday, in addition to five deaths and 1,391 cases on Thursday. ICU patients remained at 250 for the second straight day after they had went slightly up from 247 on Friday.